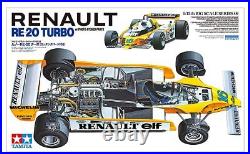 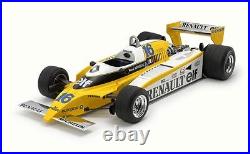 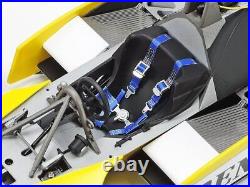 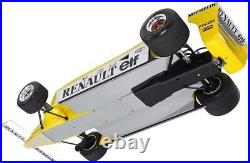 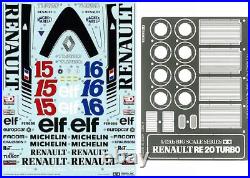 In 1977, Renault developed the first F1 machine RS-01 equipped with a turbo engine and started the challenge of the Grand Prix race. In 1979, the engine was changed to twin turbo and evolved to RS-10 which adopted the mechanism of the ground effect car, and recorded the first victory of turbo F1. The RE-20 turbo is a further improvement of this RS-10, and the fighting power has been further enhanced, especially by succeeding in reducing the weight by nearly 30 kg.

The engine is a 1.5-liter V-type 6-cylinder DOHC equipped with two turbochargers. According to the regulations, it produces about 520 horsepower and top-class output while having half the displacement of a naturally aspirated engine. The car body is finished in a typical ground effect car with side pontoons with a reverse wing cross section on both sides of the slender center monocoque. With the success of the RE-20, which won three wins, many turbo F1s will appear after that, and the Grand Prix race will enter the turbo era.

[Model outline] -A plastic model assembly kit that models the Renault RE-20 turbo that was active in the 1980 F1 Grand Prix race on a 1/12 scale. Overall length 389 mm, overall width 184 mm. It is a large precision scale model with plenty of workmanship and appearance. The front and rear suspensions have built-in coil springs and operate with the same mechanism as the actual vehicle. The V-type 6-cylinder turbo engine is precisely modeled including the turbo system such as the turbocharger and intercooler, as well as the wiring and piping such as the ignition cord and fuel pipe. The drive system such as the transmission is the same as the actual vehicle. Body cowl and nose cowl are removable. Even after completion, you can see the internal structure such as the frame configuration and the cooling system placed in the side pontoon. You can change the direction of the front wheels to the left or right by turning the steering wheel. The side skirt can also be moved up and down. The tires are made of hollow rubber with a realistic texture that accurately reproduces the characters on the sidewalls. The cockpit has a dense finish that reproduces the seat belt, shift knob, and ABC pedal. A set of etched parts for radiators, intercoolers, oil coolers, and brake discs. The photo shows the kit assembled and painted. First release month: October 2006. We use International e-Packet or EMS (over 2kg). It usually takes about 1-2 weeks (around 10 days) to get to your country. It may take more days according to the postal situation in your country or countries that the parcel goes through. For example, it usually takes more days during Christmas time.

By yourself and ask the post office of your country. So, please wait for its arrival at ease. If you return the item, please return it in all original packaging and accessories. We do not mark merchandise values below value or mark items as "gifts" - US and International government regulations prohibit such behavior.

This item is in the category "Toys & Hobbies\Models & Kits\Automotive". The seller is "jwheadphones-jetwing" and is located in this country: JP. This item can be shipped worldwide.