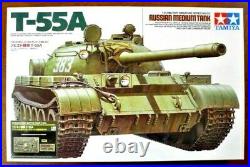 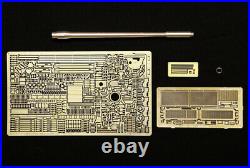 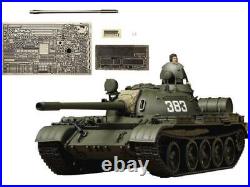 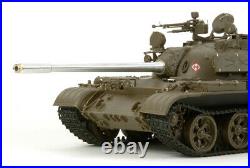 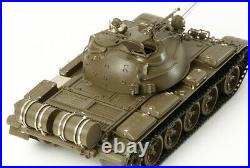 1/35 Russian Main Battle Tank T-55A (w/Aber® Photo-Etched Parts & Metal Gun Barrel). About the T-55A Production of the T-55 began in 1958 at a time of high tensions between the West and the Soviet Union. The tank was easy to produce and featured a compact hull and a dome-shaped turret equipped with a 100mm main gun. In the early 1960s, the T-55A with anti-radiation equipment was developed. T-55 and T-55A were also license built by Czechoslovakia and Poland and some received various improvements resulting in many sub-types.

T-55 production continued until the late 70's and they equipped the armies of over forty countries. They were used in various conflicts such as the Middle-East Wars and the Gulf War. The photo-etched parts include fine details such as engine grille, equipment fasteners, and commander's hatch area. The aluminum gun barrel provides the model with a heightened level of precision.

About the Model 1/35 scale T-55A plastic assembly kit model with photo-etched parts and metal gun barrel from Aber®. Accurately reproduces the tank's low-profile silhouette. In addition to the T-55A from Russian and Czechoslovak Armies, T-55 and T-55A equipped with a DShk-M machine gun from Russian and Polish Armies can also be reproduced.

Engine grille, fuel drums, and complex road wheels have all been reproduced. Comes with a commander figure and 5 marking options. This item is in the category "Toys & Hobbies\Models & Kits\Automotive". The seller is "scifi_models_shop" and is located in this country: GR.

This item can be shipped worldwide.