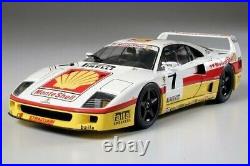 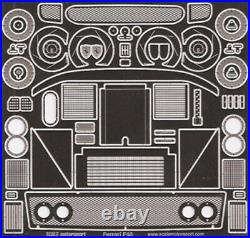 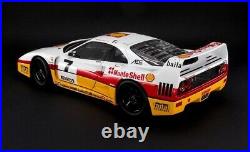 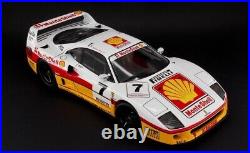 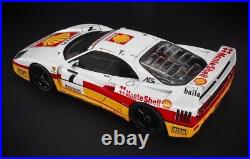 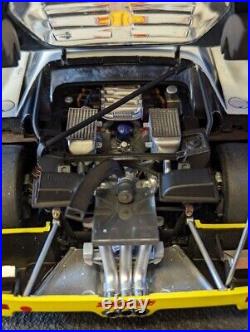 Named to celebrate Ferrari's 40th anniversary, the F40 burst onto the scene at the 1987 Frankfurt Motor Show and quickly took the racing world by storm. 1992's inauguration of the Italian GT Championship offered the perfect stage for the F40 to showcase its amazing potential, facing rival super sports cars from Porsche and Lotus. Piloted by Marco Brand, the MonteShell-sponsored Jolly Club F40 garnered attention for its dominating victory in 1992. 1993 saw Brand win the opening round, eventually winning 8 out of 10 races to sweep the championship. The fact that each of Brand's victories was also a Pole to Finish shows just how overpowering the F40 Competizione was.

1/24 Scale Plastic Assembly Kit. Overall Length: 197mm, Overall Width: 93mm. The assembly of the kit imitates the actual car construction. The V-8 race tuned engine has been replicated down to the finest details. The assembled engine is mounted on a sub-frame that is then attached on the chassis main frame.

Front and rear suspensions have been precisely reproduced. The quite racing driving compartment has also been rendered faithfully.

Once completed, the model form is perfectly accurate. Rear diffuser and car underside are identical to the actual racing car. Rear cowling can be opened and closed. This item is in the category "Toys & Hobbies\Models & Kits\Automotive". The seller is "paul1682a" and is located in this country: AU. This item can be shipped worldwide.