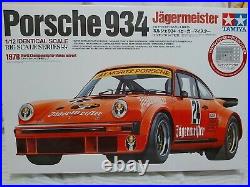 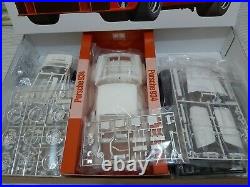 31 cars produced as 934 Racing because it is a group 4 machine based on Porsche 930 turbo. Above all, the two Porsche 934s of the Max Moritz team, whose main sponsor is the German liqueur maker [Jägermeister], feature a bright orange color. 24 won a 3rd place class in a good fight against the Porsche 935, a Group 5 specification work machine.

Plastic model assembly kit with 1/12 scale, 360mm length and 168mm width. Powerful form such as a large front bumper spoiler and an over fender that is further expanded than the commercial type is modeled as it is.

The left and right doors, front hood and rear hood can be opened and closed. The horizontally opposed 6-cylinder turbo engine has a high-density finish with various piping and wiring. Steering wheel and front wheels are linked by rack and pinion mechanism.

The tire is a textured hollow rubber racing slick. Front and rear suspensions are movable using coil springs. The interior of the Spartan room equipped with a roll cage is faithfully reproduced. In addition to etched parts such as brake discs, bonnet catches, and side radiators, the seat belt enhances the sense of precision when completed.

The seller is "tomchina" and is located in Japan Toys shipped from HK. This item can be shipped to all countries in Europe, all countries in continental Asia, United States, Canada, Australia.