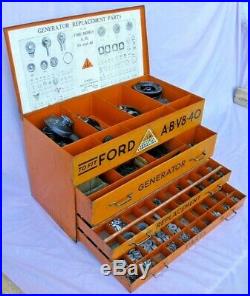 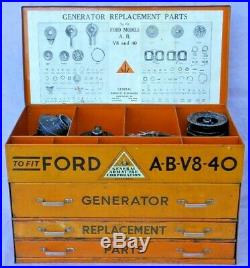 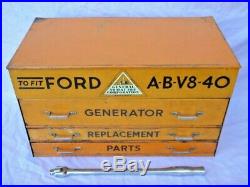 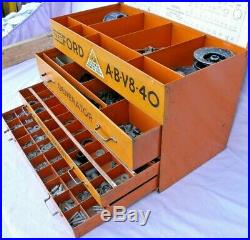 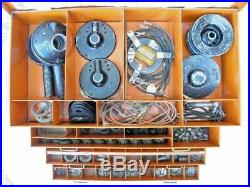 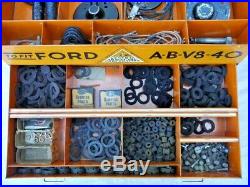 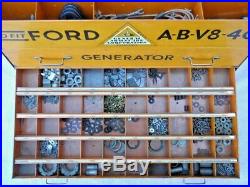 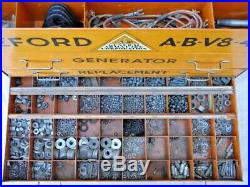 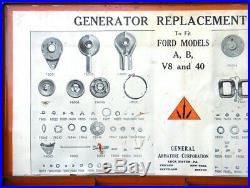 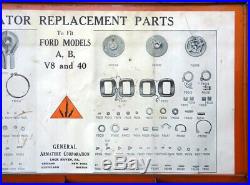 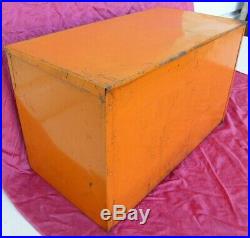 This loaded cabinet weighs right at 50 pounds. This listing is for a smaller metal cabinet filled with parts used to repair or rebuild generators used on Model A and B Ford vehicles.

It also contains parts used to rebuild generators used on the vehicles equipped with the famous Ford flathead V8 engines built in 1932, 1933, and 1934. No doubt, there are parts here that were also used on Ford generators built after 1934. As you can see on the decal on the front of the box and the on the sheet inside the top lid, t. His assortment of parts was marketed by the General Armature Corporation of Lock Haven Pennsylvania. It may have been offered to new vehicle dealerships, used vehicle dealerships, repair shops and perhaps even automobile parts supply houses.

The basic orange metal cabinet measures 21" wide by 12" high and 10-1/2 deep excluding the nickel plated drawer handles. Some of the photos here show a 1/2 drive socket flex handle in front of the box to give you some visual idea of the size of the cabinet.

There are 117 individual compartments inside this very nice old cabinet. The top opens for the storing the larger parts like the generator front and rear end caps and field windings (no field windings are present or included). It is interesting to note that the paper sheet under the lid does not show any armatures in this assortment. The 3 drawers on the front are for storing the smaller parts of which there are many hundreds if not a thousand or more. I have no attempted to count any of these parts.

The front of the cabinet is marked. As you probably know, the Ford Model 40 automobiles were built in 1933 and 1934. I doubt that this item was marketed much if any later than 1934 without upgrading the lettering on the front of the box. They may have offered assortments of parts like this after 1934. If they did, they probably would not have listed the Model 40 without listing the 1935 Model 48 or 1936 Model 68.

Please let me know if you have ever seen a similar or later Ford generator parts assortment like this. The cabinet is in good condition but there are some significant scratches on the top of the lid which is shown in the last photo of this listing. There are also some dark deposits on the fronts of the horizontal separators between the 3 drawers. There is a chance that those deposits may be able to be removed with some solvent. The right rear edge of the top lid has a very minor dent that is not readily noticed but I have to mention it anyway.

The front of the cabinet and drawers must have been exposed to the sun for a while because they are faded a bit compared to the top, both sides, and back of this cabinet. One might be able to wax the paint on the front to make it look darker but I will leave that option to the new owner. I think this very rare item looks just fine as it is. It is interesting to note that there seems to be more parts for the 1932 Ford post mounted generators than there are for the generators used on the Model A and B Ford vehicles. That makes sense because the 1932 style generator was used only in 1932 and that was a very low production year compared to the vehicles built during the 1928 through 1931 run of Model A Ford production.

I also find it very interesting that this parts group did not include the Model T generators at all. I have been involved in the old car hobby for over 60 years and never saw one of these very scarce assortments before that I can recall. If you are really into Model A, B or the early V8 Fords, this would look great in your office, den, garage, workshop or wherever you might choose to display it. The item "1928Ford1929Model1930A1931Generator1932B1933Parts1934Cabinet1936Sign1939T1940" is in sale since Wednesday, July 15, 2020. This item is in the category "eBay Motors\Parts & Accessories\Vintage Car & Truck Parts\Charging & Starting Systems".

The seller is "toysanyone" and is located in Bozeman, Montana. This item can be shipped worldwide.